Business bloggers, why do you hate America? I know you have deadlines and a paycheck to justify but you’re creating fear in the damaged psyches of the easily influenced. A better solution for your readers is right here and nearly any writer can achieve the goal.

Forbes has an article about 25 Things Influential People Do Better Than Anyone Else. This kind of article hurts the Interwebs and also my head as a writer and thinker. (I don’t necessarily do both of those at the same time. It’s hard. Like the Maths.)

It’s one of those “list posts” that web writers have learned to conjure up when they can’t think of anything else to write. I shouldn’t slam lists, I use them myself and even recommend them in my book.

But they’ve become a kind of “go to” post that often doesn’t do anything to help the reader. They’re just there to take up bandwidth and the world is rapidly running out of bandwidth. We are heading toward a global bandwidth crisis! If I had any influence, this paragraph would scare the shit out of you.

The best thing about “list posts” is that the headlines offer the reader the promise of easy consumption of the content. You know the article is offering steps that are easily scanned and might be capable of implementation.

Although a list of 25 or a 101 of anything is generally more than the twitchy Internet audience wants to read. Seriously, if you can sit through reading a list of 101 of anything, you are desperate, my friend, to find SOMETHING to make your life better. Anyone offering you a list of 101 things is really reaching, really stretching their ability to…list things.

There is unlikely to be much there that will change your life or your level of influence (or the specific gravity of nickel, which as we all know would benefit almost no one. I have no idea what that means but I like how it sounds on the page).

You need to re-prioritize your methods of gathering useful information.

In fact, Forbes’ list of 25 doesn’t really fulfill its promise. It provides few usable examples for each of the 25 characteristics of influential people. But it probably does achieve the goal of getting clicks because the target demo for the article is…people who don’t have influence but crave a portion of it scooped up like non-fat ice cream and delivered to them for free.

That’s not how actual influence works. Real influence arises from having something useful to offer a specific audience. People like to say that someone like Guy Kawasaki is an influencer but how much influence does he have in the sport of tennis? 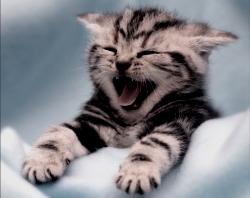 Kittens, however, are way influential on The Webs.

Note that the subhead above refers to your eyeballs being scared, not scarred. Important distinction.

Although sometimes my eyes do feel scarred after reading some of the headlines on The Webs.

The headline of the aforementioned Forbes article is designed to get you to read by scaring you into believing you’re missing out on some great Interweb secret about how to gain influence. No. Not so much.

Do you really believe that anyone has the secret to such a thing? There are only so many things you can do to gain influence and mostly in a small way or in a specific field. The rest is up to Zeus or his proxy, Calvin.

Furthermore, do you really believe you’re going to find out the secret to anything on The Webs? That’s not where wise people go to Google wisdom.

This is a bit like looking at a Klout score and expecting it to tell you something useful that you need to know about someone. It doesn’t. Chasing a Klout score has never been adequately explained to me.

Klout doesn’t publish its algorithm so how do we really know what it’s measuring? What is a useful definition of “influence” vis-á-vis the web? It’s not the same as getting page views. That is not how you can measure an influence that will impact your business.

All businesses online have, I hope, a goal of serving their customers. I understand the desire to measure social media activity and to have a sense that the effort put into it is helping the business.

But in the end, especially for small businesses, you must pick and choose your fights. You can’t service every social media channel effectively in a way that is useful to your target audience. So stop trying!

If you’re blogging to be influential, forget it. You’re going to fail. Blog to provide useful information to your audience or at least to entertain them and yourself.

The rest is just noise.