I know this might hurt your sensibilities, and I’m really sorry for that, but let’s say it out loud…there is nothing precious about paper books. It doesn’t matter what form a book is in before you put it into your head. What happens as it goes into your head is what matters.

It’s just gross to romanticize paper books. Millions of trees are slaughtered, habitat destroyed, and dead dinosaurs spilled (ink). They take up a lot of room and they eventually fall apart.

Saying you can’t make the move to e-books because you “…love the look and smell of a ‘real’ book in my hands” is like Guttenberg saying, “I love unrolling a scroll, and the crinkle and smell of papyrus. To hell with this press idea. It will ruin books as we know them.” 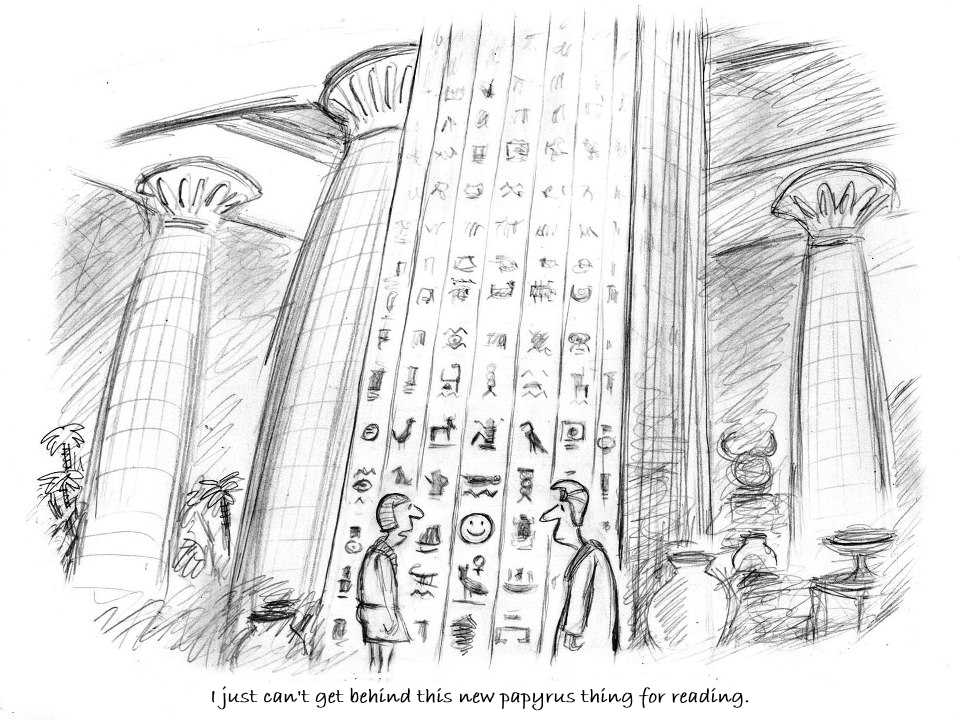 Real books are in your head

The reality of your relationship with a book is what happens in your head. Most of the time, if the writing is compelling, you don’t notice the way the content is delivered. The only way you notice the form is when your hand cramps and you have to switch to the other hand (unless the book is too big for one hand).

I’ve been a convert to electronic print for over a year now. I used to be one of you. I said all the same things I hear over and over now from friends and family about their unwillingness to give up paper books.

“I love the look of real books. I love how they smell and how they feel in my hand.”

I never thought it would come to this. Books have been a huge part of my life since I was able to read. Before then, I mostly used them to reach my brother’s toys so I could break them.

I still own over 300 paper books that look nice on the shelves but rarely get opened.

E-books are real books. Books happen in your head. You read a novel differently than your neighbor does. (But that doesn’t really count because your neighbor only reads pictures on the Interwebs. I looked through his window one night.)

Great authors rely on your imagination, which currently resides mostly in your head, to fill in details about plot, story, and character that would be ridiculous for them to write for the same reason that we hate exposition in movies. It’s unnecessary. Write the story well and the viewer fills in the details for themselves.

With a book, that is truly a huge part of the thrill of reading. What happens in your head. Not on the page. Again, how it’s delivered to your head is irrelevant.

Why hasn’t Big Publishing embraced this yet?

The cost of a hard bound book has little to do with its value and lots to do with the publisher’s profit margin. The resistance on the part of publishers to moving to e-books has to do with margins, not the cost or  effort it takes to produce a book.

In the 1930s, the introduction of mass-market paperback reprints of existing works was wildly successful. At that time, Penguin had to sell about 17,000 copies just to break even because the books were so cheap. But the demand was fierce. No one seemed to mind having a cheap cover and thin paper when the content was the same and the price was extremely affordable.

The discrepancy between a hardback and an e-book is even greater in many cases. The publishers try to protect their margins on some hardbacks by keeping the e-book pricing in the $10-$15 range, close to the same price as a paperback. I know that for me, I have to really want to read that book now to get myself to pull the trigger on $15 for an e-book.

Some paperbacks are now released with an e-book version that is much cheaper. I’ve purchased e-books for $2.99 that were $10.99 in paper. In that case, there often is no hardback version.

I don’t know anyone who has really embraced the e-reader who has said, “Nah, I think I’ll go back to reading paper books.” I love e-books and the whole concept of the availability of millions of books almost anywhere I am on the planet.

The only gripe I have is that it’s made it much easier for me to buy, which Amazon knew before they embarked on this venture. I have purchased more books in the past year than probably the previous five years. And I’m a bibliophile. It was always easier in the old days to put off a purchase because I had to go somewhere to buy or I had to wait for delivery.

Both are now done right from my easy chair.